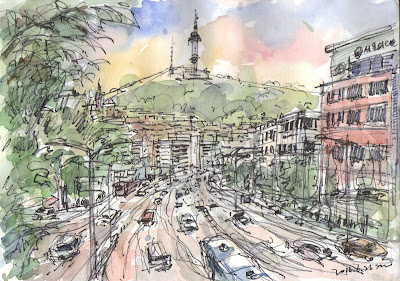 distant view of Namsan Mountain(남산) from the station 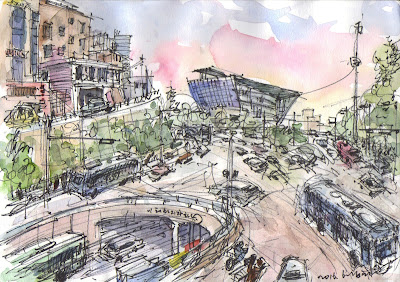 surrounding scenery viewed from pedestrian overpass nearby the station 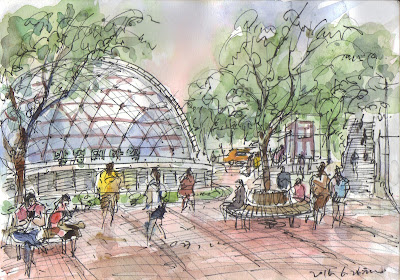 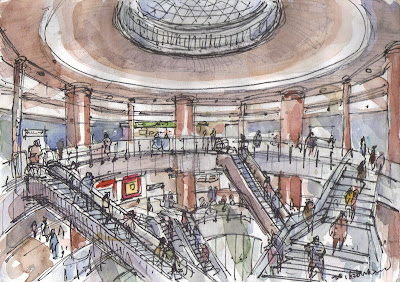 a scene on the top floor inside the station 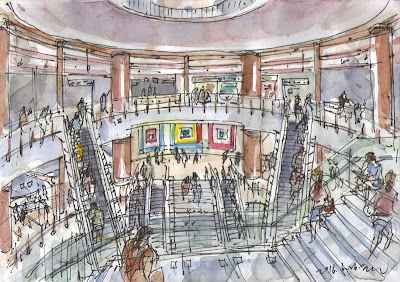 another view on the top floor 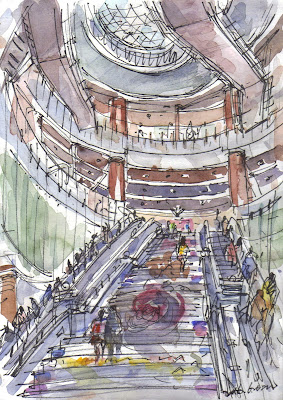 main stairway and escalators viewed from the lower floor 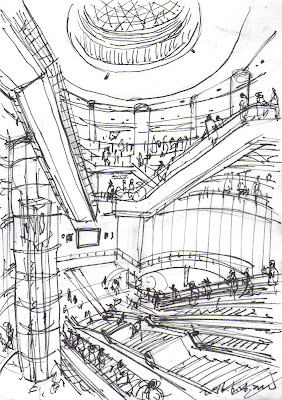 main stairway and escalators viewed from the top floor 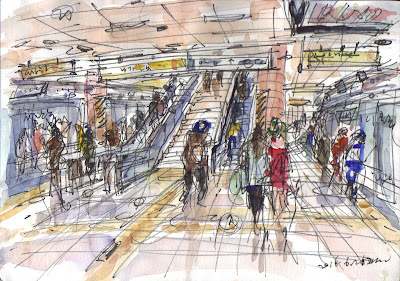 subway platform(승강장) on the lowest level
.
( 21 x 29.6cm sketchbook.  pen, watercolor )
.
A few days ago, I had a chance to sketch a beautiful subway station located near Yongsan-gu Office(용산구청). Noksapyeong Station(녹사평역) on line No.6 is known for having the most beautiful interior and a spectacular underground space for a subway station.
The glass domed roof allows plenty of natural light into the station. Inside the station, the crisscrossing escalators and stairs traverse the spherical space that runs through five levels. Especially on the main stairway, it was very impressed to hear Korean traditional music when people go up the step with shining light. Because the American Army base(미군부대) locates nearby, I could see occasionally foreign passengers while sketching. Among them, some people showed interest in my sketches with favorable comments. It was very exciting sketch time trying to draw various forms and movements.
--------------------------------------
남산과 미군기지, 신청사를 둘러보는 용산의 중심지
작은 유리돔 아래 아담하고 스펙타클한 지하철 공간
다이나믹한 직선들과 동심원 곡선들이 교차하면서
천창의 빛과 색색의 조명아래 오르내리는 인파들~~
녹사평 역사는 작은 보석과도 같은 스케치장소입니다.
작성자: Lee Yong Hwan 시간: 8:39 PM No comments:

Welcome to Tacoma!
Join us next summer in another fabulous west coast city, Tacoma, Washington, for the fourth in a series of annual west coast urban sketchers sketch crawl events. We have been in the San Francisco Bay Area, Portland, and San Diego over the past three summers, and this coming summer we offer up Tacoma, the second largest urban area in the state of Washington. Tacoma offers an historically and architecturally rich downtown area that cries out for the sketcher/artist to pay it homage, and we are excited about sharing that opportunity with the global urbansketcher community . . . . . . .

Email ThisBlogThis!Share to TwitterShare to FacebookShare to Pinterest
태그: sketchcrawl 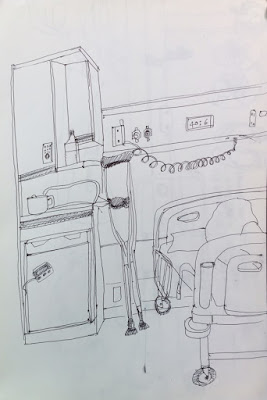 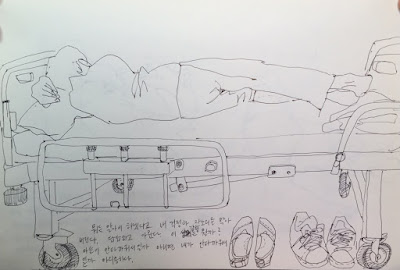 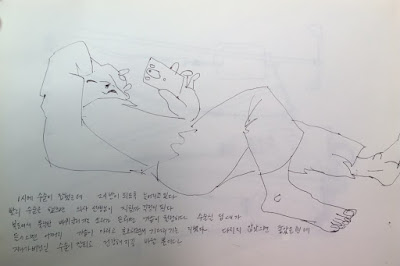 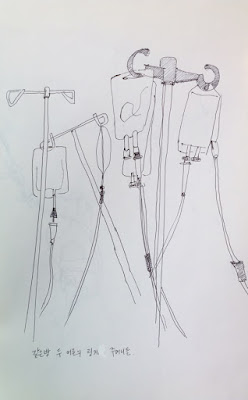 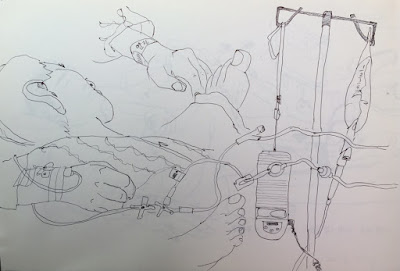 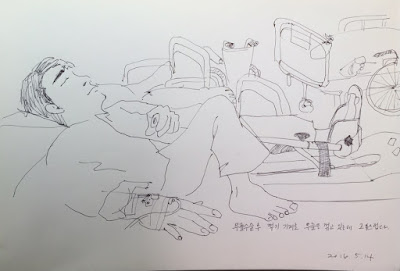 sketches at the Guui subway station 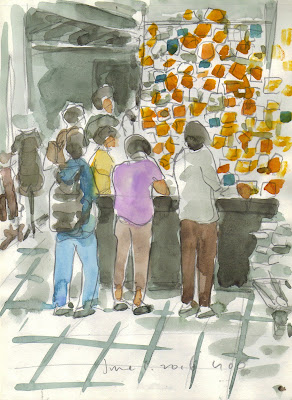 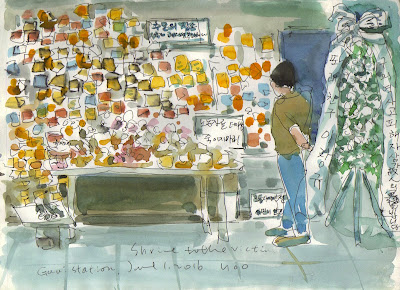 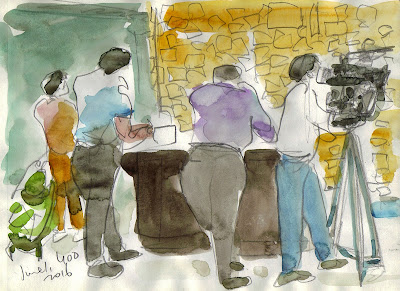 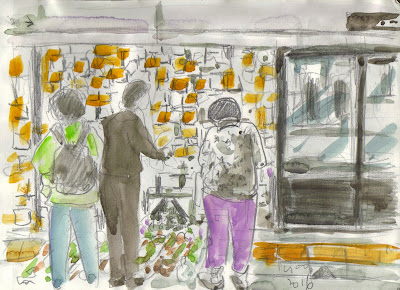 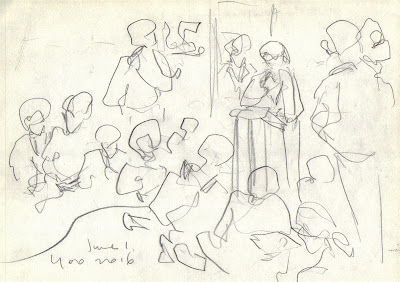 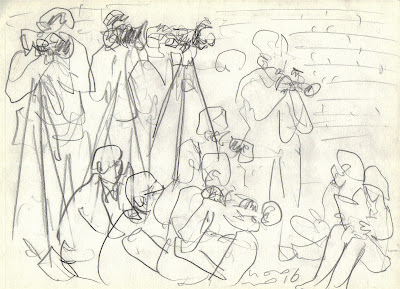 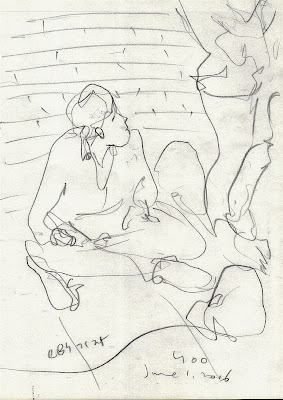 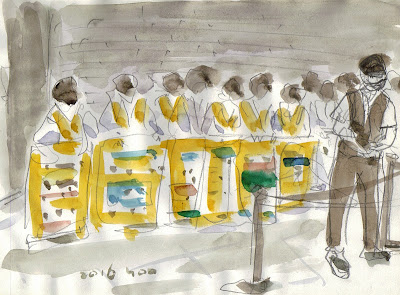 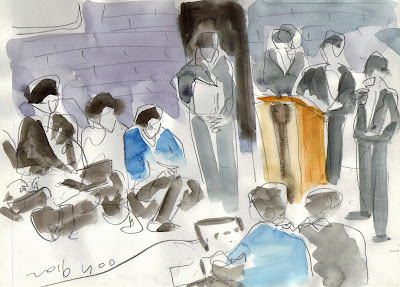 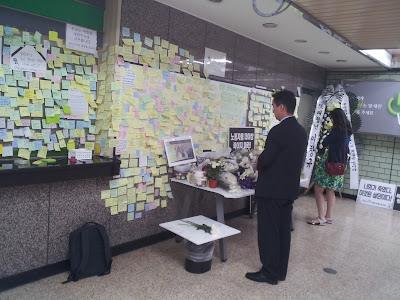 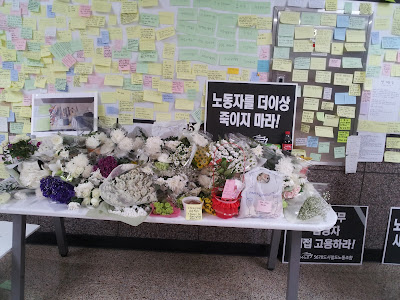 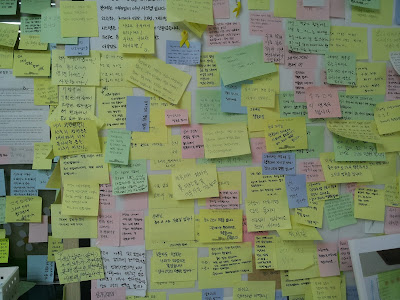 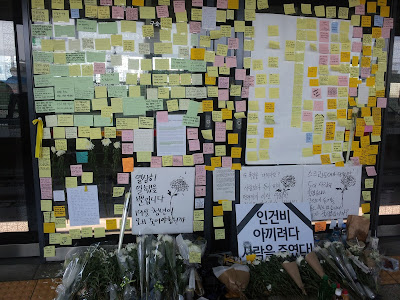 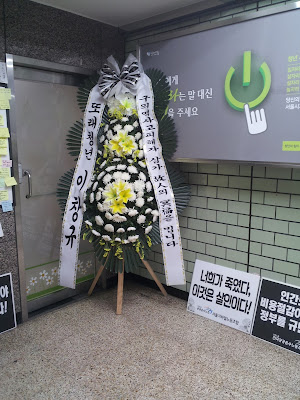 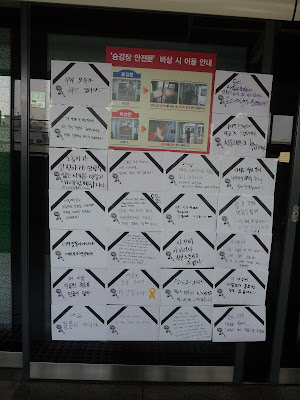 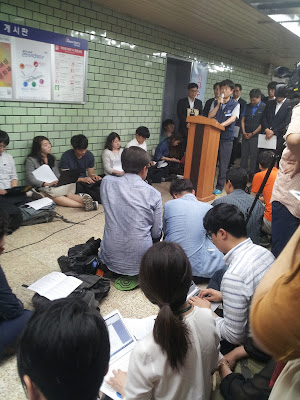 I visited the Guui subway station to pay my condolence to the young man(19 years old) who died just a day before his 20th birthday while repairing the screen door at that station. Cup-style instant ramen found in his bag with other tools aroused people's sympathy. Lots of sticky notes, flowers, ramen, bread bags and other heartfelt presents were laid on the desk. At first the shrine was on the place where the accident happened(9-4, Guui station), but the station office moved it to the passage under the scene of the accident, which caused people's fury. And the officials set the shrine at the first place as before. People could visit and leave notes at two places.
After finishing several sketches I heard some noise at the passage and found a press interview was going at the passage. I stood near the post line to sketch more. The guard near me seemed to think of me as a reporter. Related officials announced some plans to prevent recurrence and responsible steps about the accident. Lots of questions continued by the journalists and social welfare persons.
Today some related officials' resignation was accepted. While sketching the interview scenes I heard the statements of the officials. I felt same emotion as the reporters.